Imagine Skye as a 19-year old and you're looking at Sweet. Except remove the bad attitude of Skye and replace it with an equal amount of over the top cuteness. Sweet Autumn is oddly creative when it comes to renewing her own appearance and it's not uncommon to find her sneakily tagging other peoples gear with random doodles. Her appearance and behaviour makes it easy to dismiss her as a naïve and harmless girl but then again she is the younger sister of Skye.

Sweet has a fondness of all things that go boom. Loud, flashy and heavy is her way of dealing with Lumes. She rushes into any battle without hesitation and makes sure to have a damn good time while she's at it.

Equipped with her brutal REX and a sturdy exo-skeleton she's ready to withstand heavy recoils and wild leaps through the air. It's not uncommon to see her bouncing around the battlefield like a kid in the middle of a sugar-rush. She might seem careless and easily distracted, and that's exactly what she is. She's still killing off Lumes as if she was custom built for the job. 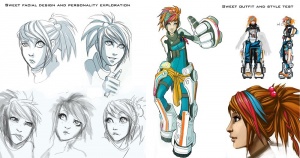