Skye Autumn, the elite soldier and over the top confident badass of Sanctum 1. Assault Rifle in hand and a wry smile on her lips she is known as the one who single-handedly defended the Cores from massive hordes of the bioluminescent alien creatures known as Lumes.

Growing up as the army brat daughter to one of the first Core Guardians on LOEK III, she was always meant to follow that same path. Seeing her father being celebrated as a hero of the people in Elysion One inspired her to give everything and more during her training. Brought up in the sheltered environment of the Elysion Research Facility, she spent all her time perfecting her skills. She cared for nothing except becoming the top ranked prospect in Guardian training. She succeeded. However, right before her graduation, her father was injured during a mission later known as "The Renfield Incident". He died shortly after. Skye’s reaction was violent and she quickly turned from being the perfect student into a merciless, patronizing ass towards people below her skill-level. She also showed little or no respect for authority which could have resulted in having her Core Guardian status removed if not for the fact that she had such raw talent in battle. Her bad attitude is simply tolerated as long as she keeps killing off Lumes for the sake of Elysion One. Skye lives for the adrenaline rush of the perfect kill and enjoys battle as if it was all a game to her. The rumors say that her crazed laugh after a successful mission even makes her commanders feel uneasy. Skye herself is very well aware of her bad reputation and makes no attempt to improve it. Why would she? 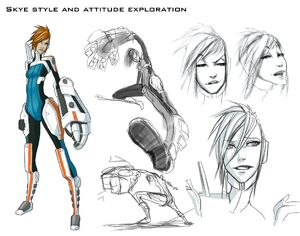