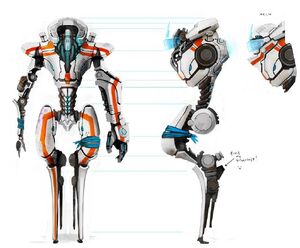 Built to function as a mobile communication device connected to the military base, SiMo accompanies the Core Guardians and assists them. Robotic technology in Elysion One has been developed over several years and SiMo was one of the first models from its batch. It is considered to have developed into one of the most successful units since the SiMo model was introduced as a part of the military. A programmed ability to learn from experience over time means that the longer a robot is used in the field, the more it learns and adapts to situations in battle and social interaction. Because of all its years of service it is able to act naturally around humans despite not having any real emotions itself. It monitors their behaviour and calculates appropriate emotional responses to make sure its team keeps their spirits up or if it wants to it can make them feel really uncomfortable, just for laughs.

Its main function in the group is to guard the Core Guardians and use that sniper rifle which it can wield with excellent accuracy. It keeps track of missions, coordinates and calculates risks, protecting its team like a bodyguard. As if its default functions weren’t enough, Haigen has made some personal modifications to make sure SiMo really has all the abilities the team needs. To modify a SiMo-unit isn’t exactly legal but the longer the unit stays with the same team, the more loyalty it develops towards its mates. SiMo also acts as a moving sketchbook for Sweet who happens to enjoy drawing and putting stickers all over it. It’s fine with that if it keeps her happy. Androids might not be able to fully understand friendship, but its knowledge of the concept is enough. SiMo can be really likeable if it wants to.