A common slumdweller from the old ruins of Brightholme, Haigen Hawkins somehow managed to reach the position of Core Guardian in Elysion One. Life was a constant struggle for food and money because he grew up with his mother and siblings in the slums' harsh environment. Even with the limited access to education, he constantly surprised those around him with his intellect. Haigen was considered to be an unsociable outcast by those around him; his calm and collected personality make him appear very introverted. Working stray jobs around the slums let him provide some stability for his family. Whenever he could, he'd spend his time collecting and repairing technological gadgets and machines. He met Charlotte Wray, aka TSYGAN, when she was 19 years old, and helped her in her revolution against Brightholme.

By a stroke of luck (or fate, depending on who you ask) he happened to be at the right place at the right time. For some reason Sweet gave him a chance to leave the slums behind and become a citizen of Elysion One[1], with all the benefits of a true Brightsider. Grasping his opportunity, he decided to apply for military service, and left Charlotte in Brightholme. He still sent her information regarding The Bright Foundation.

Despite his lanky body and quiet nature, he proved himself to be one of the most promising new recruits in his year. Whether it was the slums that made him stronger, or just pure willpower, it was difficult to say. In any case, he climbed to the rank of Core Guardian and was put into the team as an engineer and close combat soldier. He appears almost bored by everything that goes on around him, but he's very observant. Haigen has an obsession to constantly question things and tries to figure out how they work. His primary trait is his incredible intelligence. He outwits anyone he talks to (if he decides to talk, that is). 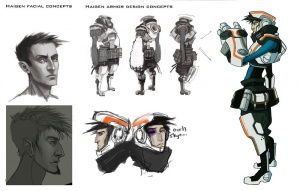