The following is a detailed discussion of the underlying calculation method. If you only wish to quickly calculate the optimal distribution, you can skip to the Reference Table further below.

The following piecewise-defined function describes the relationship between the amount x invested into the AMP Spire of the total resources c and its effect on total DPS dealt by the towers (including the AMP Spire's bonus): 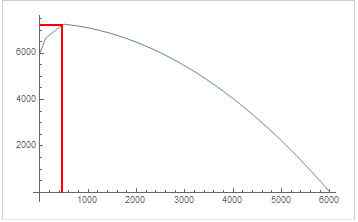 In this example a is set to 1 and c is set to 6000. The red lines indicate the position of x at which the function's value is maximized. In other words, in the case of c=6000 a budget of 500 resources must be allocated towards the AMP Spire and the rest of 5500 resources must be spent on Damage Towers in order to maximize the total DPS. Note that an increase or decrease of parameter a will only affect the total DPS, but has no impact whatsoever on the optimal distribution of resources. This means in the case of c=6000 the optimal distribution will always remain 1:11 (500/5500).


Due to the dynamic relationship between parameters x and c together with the complexity of the function itself, calculating the optimal resource distribution on-the-fly becomes quite unwieldy. For convenience sakes a reference table has been calculated using appropriate software. Simply choose the value for parameter c that approximately matches your current budget and you can read the optimal value for x.